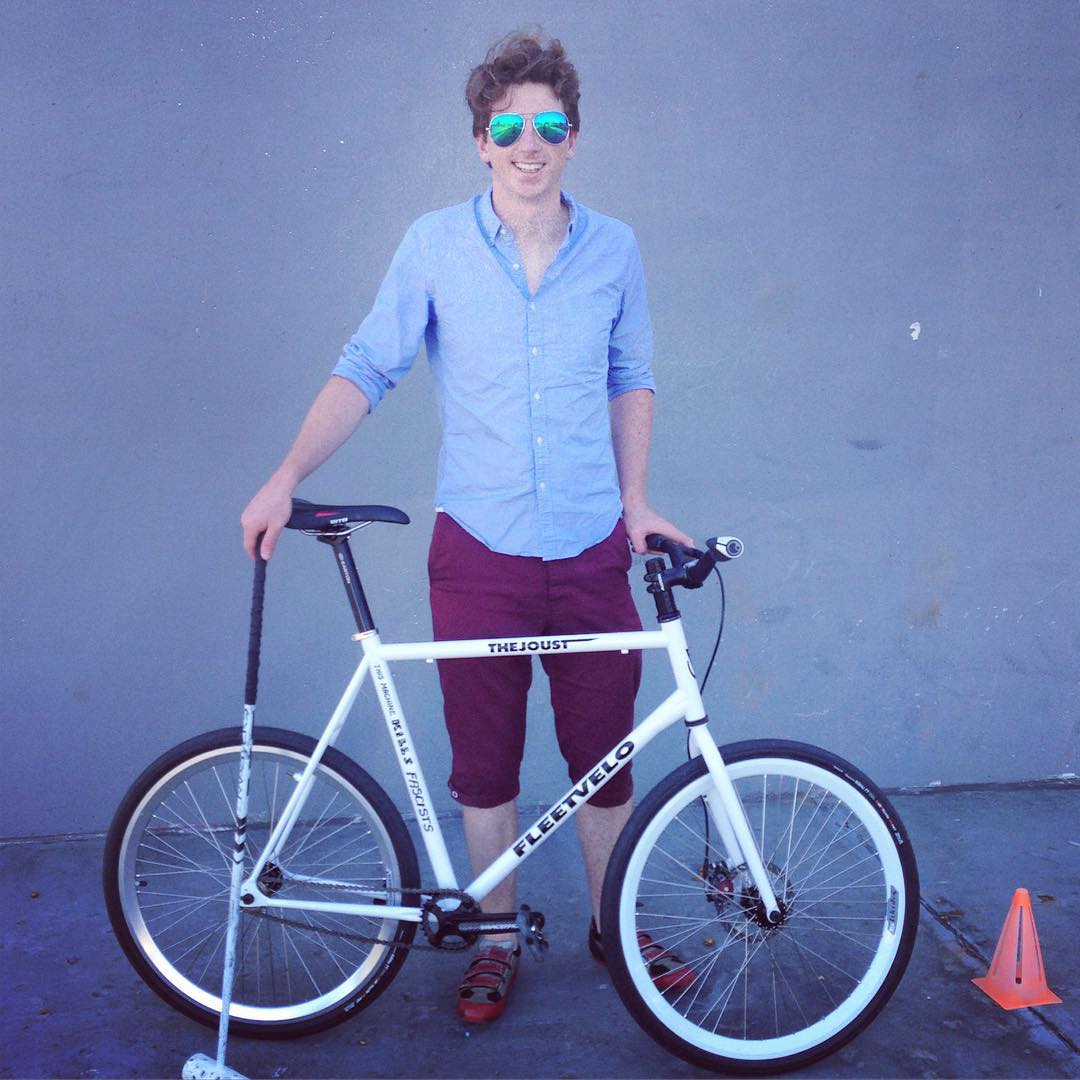 Slayer Spotlight is a new Davis Bike Polo blog series to highlight the amazing people that make up our world-wide bike polo community. In this installment you get to meet Caleb, one of the sweetest people in polo. If you haven’t had the pleasure, next time you see him at a tourney, introduce yourself, you won’t be sorry! You can also listen to Caleb talk polo (after reading this post of course!) on the Shuffle: A Polocast, Ep. 10. 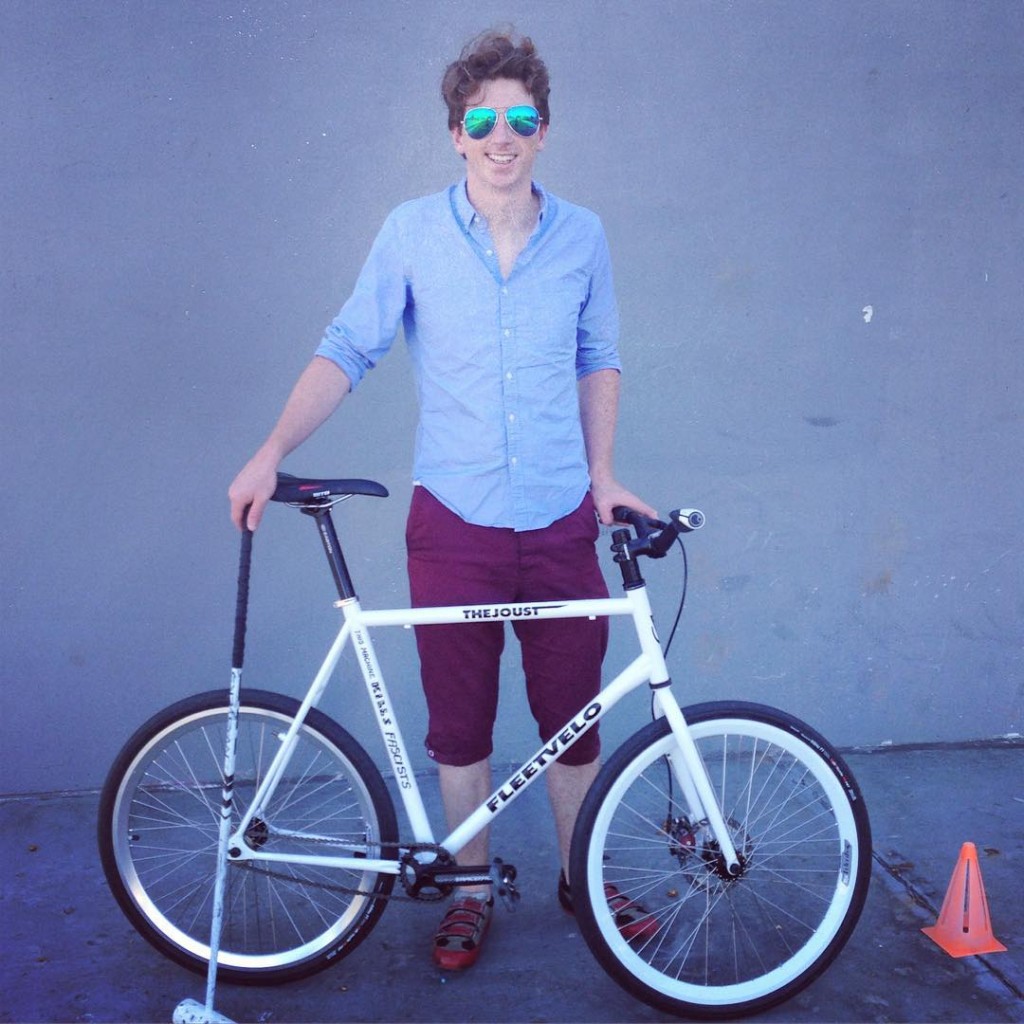 I learned to play in West Lafayette, Indiana with a club that started on Purdue University’s campus. One night, I was walking around and saw people playing. They invited me to try it out, so I did!

I feel in love instantly. It was as if hockey and biking, my two favorite sports, had a love child.

I now play in Lansing, Michigan where we have a great club. Players have played for many years at Michigan State, but never traveled to other clubs until about a year ago. Now, we practice twice a week and even have an indoor spot for the winter. Our club is small compared to others, but full of dedicated players who are always willing to learn.

Tell us about something you recently did that makes you proud.

This year we started a statewide recreational league called the Michigan Bike Polo League. We were able to organize players from four cities to compete in a series of matches. Not only did it help our new players learn the rules, but our veteran players we able to practice strategies and new plays. Recreational polo in the Mitten was a great way to engage players in the joy of bike polo, while also helping the local clubs prepare for out-of-state competition. This fall we hope to bring even more teams together across the state.

Tiffany from Lexington, Jenny from Davis, Amy, Megan, and Betsy from Indianapolis, and Jake from Milwaukee. All of these people have been amazing assets to their clubs and have the courage and persistence to navigate unknown territory to make bike polo bigger and better than ever before. I admire their vision and action. Keep it up you all!

I would like to see bike polo focus on growing clubs since more numbers will lead to more talent, creating drills for beginners to help retention of recruits, teaming up with city and university sports programs to become recreation-oriented polo, and focusing attention at state level events to feed regional and national events. 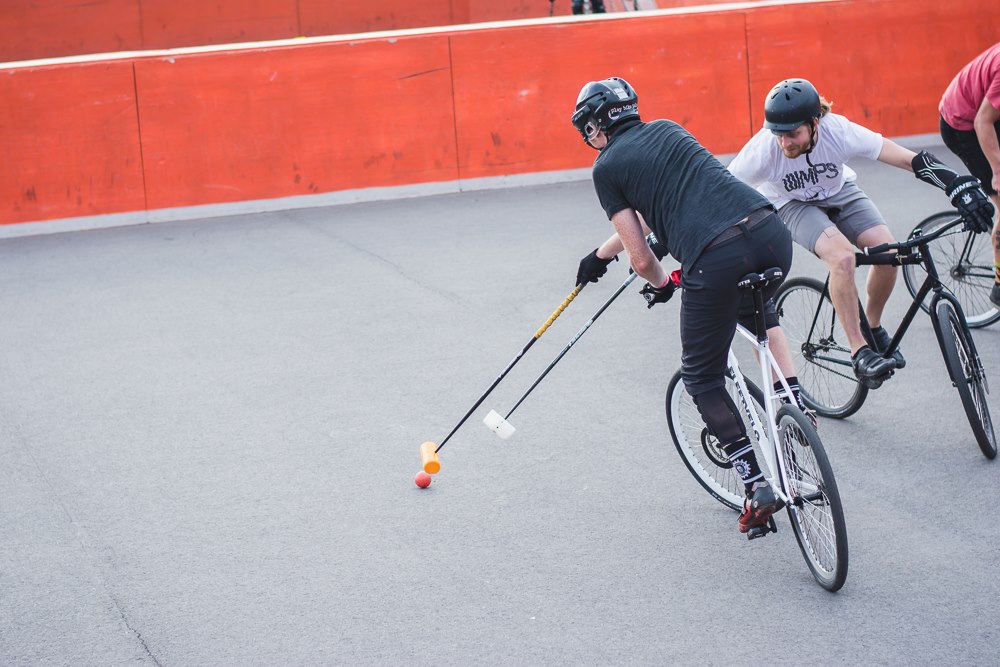 I’d be riding my bike with fewer stories.

I sleep and eat.

Everything I would say has already been written by the Hot Honey Biscuits: http://321polo.net/2015/01/helpful-tips-from-the-hot-honey-biscuits/ 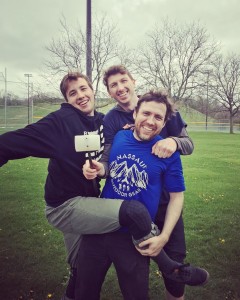 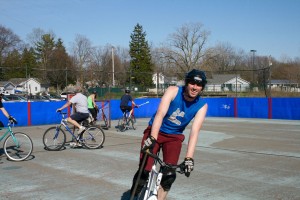 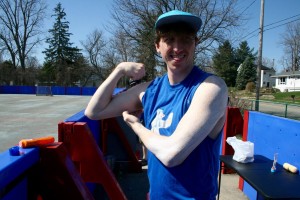 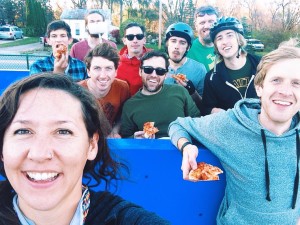 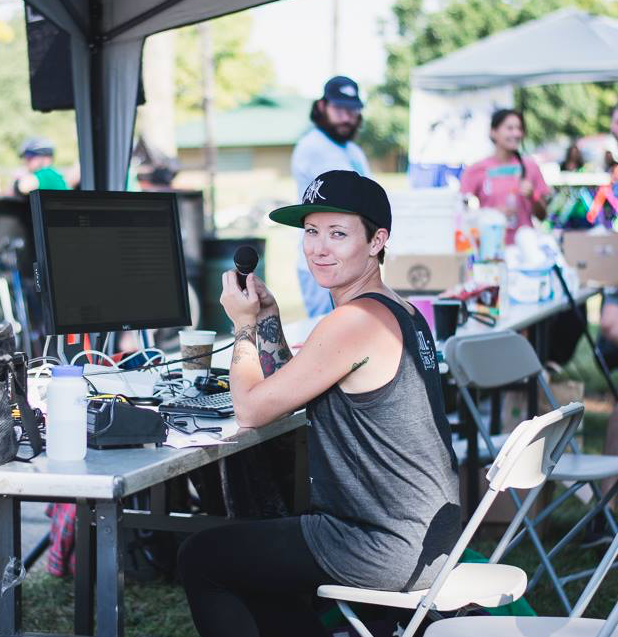 First, I want to say a big huge thank you for giving me this opportunity, Jennifer! Honestly, your work towards bike polo is commendable on the highest of platforms! Helping Sam get to LA8,  and with Mikaela and her being able to go to Mexico, with Davis Bike Polo in general, and for all of the organizing and tournament help/photos/general great attitude. You’re a gem of a human and bike polo is fortunate to have you.

I was introduced to bike polo in 2007 by Shane Murphy in Toronto, ON CA. There were a bunch of guys playing and they wanted their female partners or friends in on this great game, so we had an WTF [Women/Trans*/Femme] intro night where 6 of us showed up on random bikes and got in some time with helpful [off-bike, off-court] coaching from the guys.

I started playing in a really great time for community development. It was a time when there wasn’t as big an emphasis on highly competitive levels but rather on developing the sport and spreading the game to new cities. Lots of travel and lots of friends made all over the world. To me, it was the best balance to find in a sport. One that incorporated cycling but also community and competition. I loved it from the moment I got on the court for the first time.

I’ve been fortunate to have played in many cities over North America. Started in Toronto, lived and played in NYC, Philadelphia, Austin, and am now back home again in Toronto. Our club is growing with a superb rookie night, the diversity is back in our pick up nights, and we have a great community facility for our club to call home.

I imagine it to be the same in any niche sport culture, you feel a little special knowing you’re involved in this really great thing that’s widely unheard of, it’s sort of a secret amazing club worldwide! You’re willing to take the risks, spend the money, and live an affirmed lifestyle seeing so many others involved in the same way with similar passions. It’s inclusive and welcoming to be a bike polo player. It’s also challenging and rewarding.

How are you involved in the bike polo community?

As a player, currently, I’m focused on playing solidly again after a recent knee injury and surgery to fix it. As an individual, I have been and tend to be deeply involved with the development of the sport. Previously, I was the Tournament Chairperson on the board of directors for the North American Hardcourt Association. I held that post for almost 5 years. In my time, there were many different aspects to the growth of bike polo addressed and worked on, but ultimately I pride myself on helping more cities and communities throw successful tournaments. I also contribute now as a business owner, having developed a comprehensive cycling denim product for women [and soon to expand], I hope to continue to be able to sponsor riders and tournaments, as well as provide products geared towards bike polo specific needs in the future.

Tell us about something you did (something polo related and something life related) that makes you proud.

Honestly, the continued progress through my company, RYB Denim Inc., is something that I’m very proud of. Overcoming the many challenges related to starting not only a business, but one that operates specifically to address technical needs of a lifestyle but has to exist in the realm of the fashion industry, has been one of, if not the, biggest challenge of my life and every day that I get through and move forward is a moment of pride. I credit the community of bike polo for allowing me the opportunity to present my ideas and for its continued support throughout my process. 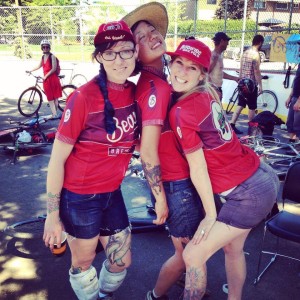 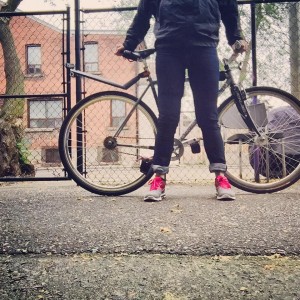 The most challenging thing about bike polo is how to plan to play as much as possible on a trip that makes sense! There’s so much great polo worldwide that dividing the time and capital it takes to make it all over the world and play is a challenge, but it’s one of the best to have. 😉

What are some challenges you’ve had to overcome when playing bike polo?

Currently, my challenge is getting back on my bike and being comfortable playing. Injury and having to have surgery as a result, has been an emotional and physical setback. Nervousness and anxiousness while first getting on the court is something I’m having to face now, and will be a challenge to overcome that I happily accept.

I’ve answered many an interview question like this and it’s always the same: the community of people that is bike polo.

Come out to our rookie night with a bike and a positive attitude! All are welcome! It’s a great thing to at least try out, you will only lose by not trying at all. =]

I really respect all of the companies that have started as a result of bike polo, or that have incorporated bike polo elements into their product line. I have to tip my hat to Fixcraft and what they’ve done for the sport of bike polo. I know full well the depths to which they’ve sacrificed and happily given to the growth of this sport, both in products and the community cultivation of our entire sport. Thank you Fixcraft! 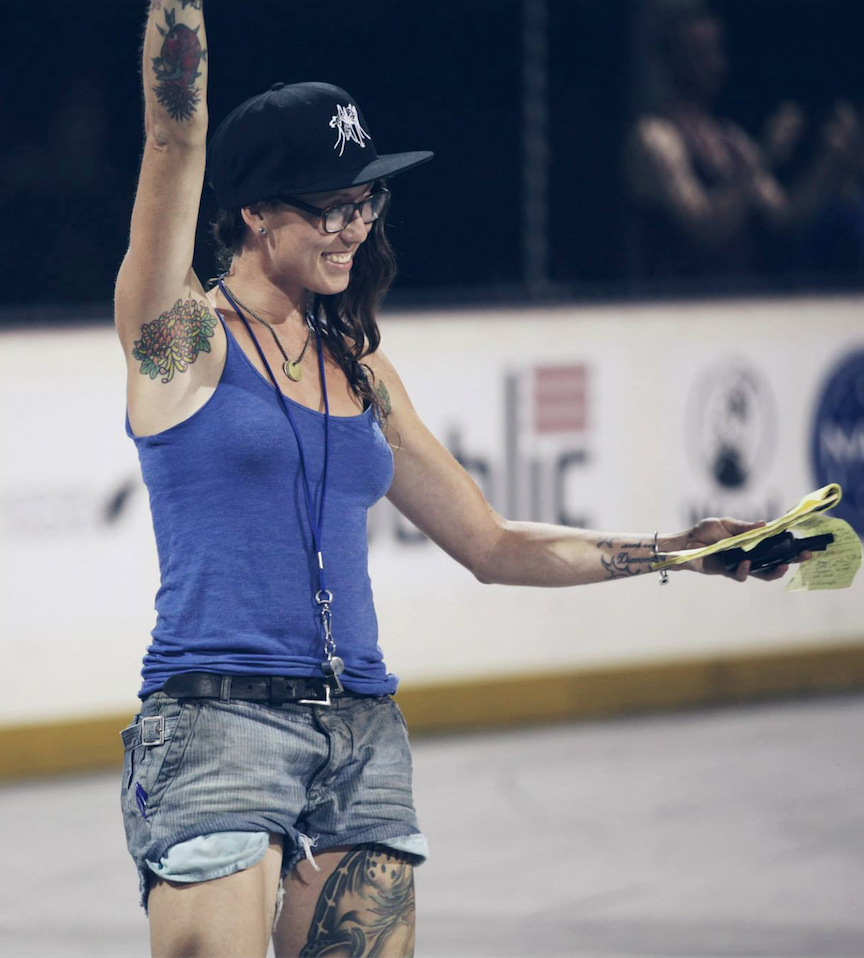 Oh my! I’ve seen so many great players from all over the world, past and present, it’s really hard to pick even just a few! Off the top of my head, I’d put the team Mosquito in the polo hero category. Why? They’re Canadian [!!!], they’re gentlemen on and off the court, they help develop the middle region of bike polo in Canada, and they are genuinely willing to help out at tournaments doing whatever you need them to do. Oh! And they kill it as a team on the court! Shining examples of great polo players. Their extended family are also heroes: Andrea and Greg!

I doubt my life would be anything like it is today. I know I’d still be riding a bike, but I moved across the continent and have traveled the world with the community of bike polo. Nothing I am would be the same had I not found bike polo. The only other activity I’ve dedicated myself to recently has been axe throwing. It’s a competitive league as well. I didn’t stray very far in concept though, another great community of people enjoying time together as well as a healthy level of competition. I think niche sports are my thing.

Relaunching RYB Denim Inc is all I’m working on besides my physiotherapy and recovery to being fully healed.

Oh my yes! This is 100% related to recovery! My goal is to be playing in the Ladies Army 8 tournament in June in Guadalajara, MX! This is a VERY big goal to reach and so far so good! After that, it’s a bit of a gravy train. Just get back in and get some new equipment upgrades to level up a bit.

Stick with it! Hopefully you can see yourself as a member of the community of people around you, this will keep you coming back! The skills all come in time. 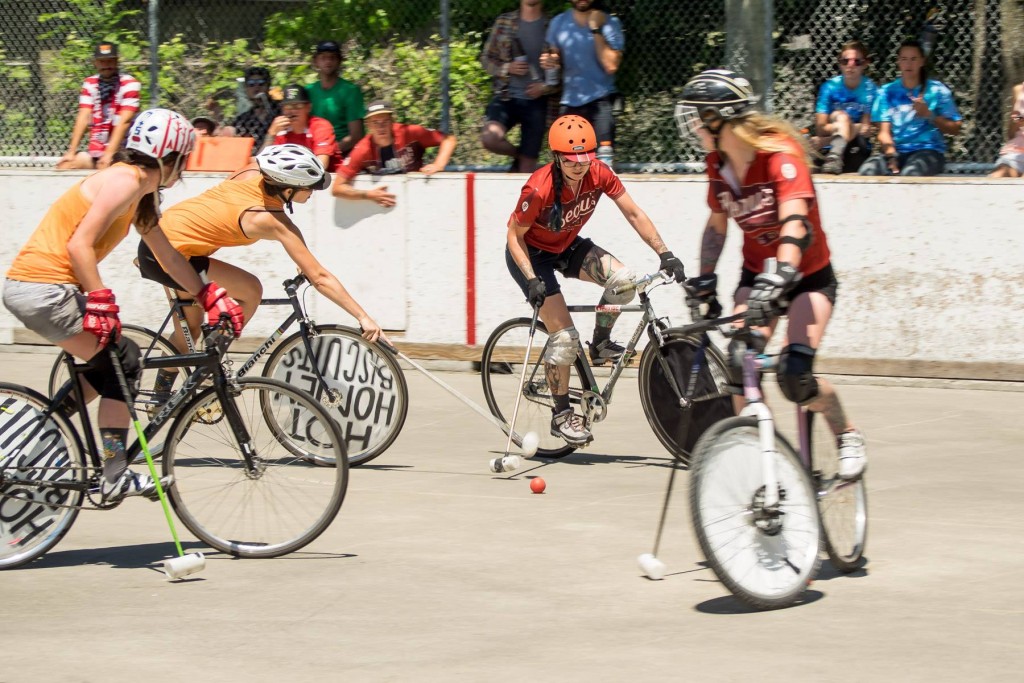